GIGABYTE B250-FinTech is equipped with 12 native PCIe slots giving the miners the opportunity to mine with up to 12 GPUs at the same time for maximum performance. Also, it comes with two 12V AUX power connectors making sure your system will always have the power it needs. 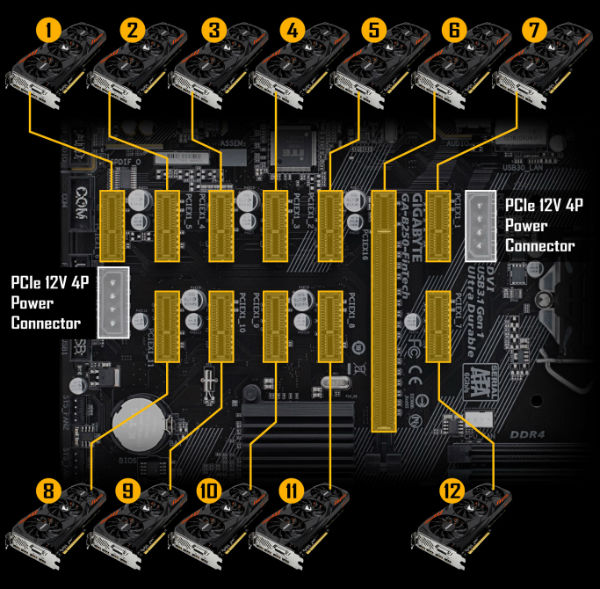 The GIGABYTE B250-FinTech not only offers double the GPU support than standard motherboards but at the same time saves you money. Get the same mining performance without having to pay extra money for a second setup. Paying extra money for a second CPU, motherboard, HDD / SDD and memory kit can be costly. That's what makes the GIGABYTE B250-FinTech the ideal choice for miners!

This GIGABYTE exclusive mode elevates your mining efficiency to unprecedented levels. Simply select the BIOS Mining Mode and it will automatically update settings to maximize stability and compatibility with multi-graphical configurations, making mining easier and more efficient than ever.

Choose from different modes, Quiet to Full Speed, to match your system usage scenario. For each fan or pump, you can use the intuitive fan curve to define trigger thresholds and corresponding fan speeds.

The enhanced BIOS interface also has the advanced features seen in the Smart Fan 5 UI, such as: the ability to set triggers based on different temperature sensors on the board, fan curve definition and the temperature interval setting, which can prevent fan rotation noise caused by sudden temperature change—all without having to load Windows.

Hardware Troubleshooting at a Glance

Onboard LEDs controlled by the system BIOS indicate if a malfunction is occurring, allowing users to quickly diagnose which major component (CPU/DDR/VGA/HDD) is malfunctioning so they may take action promptly.